Understanding language can be a difficult task due to many factors. Many times, individuals have a hard time understanding why they follow grammatical rules because of the subconscious nature. American Sign Language is no different in its problematic understanding, in fact, in some ways is more difficult due to the fact that it is under researched. However, American Sign Language is in fact a language and deserves further research in order to understand how it functions and how its users manipulate it in order to function with other native users and users of other languages. All languages share the same difficulties in understanding, interpreting, analyzing, and more. But through the similarities, when researched properly, allow for a possibility of vast comprehension of more than just American Sign Language, but of language in general. 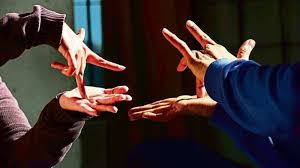 Universal Grammar is largely credited to the research and evaluations compiled by two linguists, Noam Chomsky and Howard Lasnik. It is important to understand what Universal Grammar means in order to understand how it can be applied to American Sign Language. The University of Oregon defines Universal Grammar as “an innate, genetic endowment of language-specific knowledge consisting of the principles and parameters of language [;] an idea promoted by Chomsky (more developed notion of LAD)” (Guion UO).